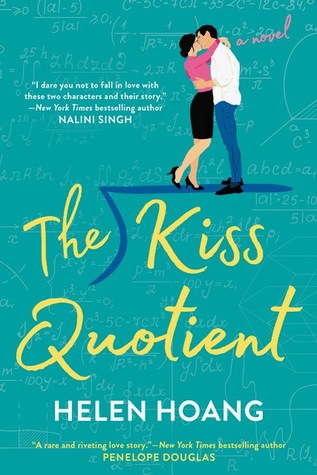 A heartwarming and refreshing debut novel that proves one thing: there’s not enough data in the world to predict what will make your heart tick.

Stella Lane thinks math is the only thing that unites the universe. She comes up with algorithms to predict customer purchases–a job that has given her more money than she knows what to do with, and way less experience in the dating department than the average thirty-year-old.

It doesn’t help that Stella has Asperger’s and French kissing reminds her of a shark getting its teeth cleaned by pilot fish. Her conclusion: she needs lots of practice–with a professional. Which is why she hires escort Michael Phan. The Vietnamese and Swedish stunner can’t afford to turn down Stella’s offer, and agrees to help her check off all the boxes on her lesson plan–from foreplay to more-than-missionary position…

Before long, Stella not only learns to appreciate his kisses, but crave all of the other things he’s making her feel. Their no-nonsense partnership starts making a strange kind of sense. And the pattern that emerges will convince Stella that love is the best kind of logic.

The Kiss Quotient follows Stella Lane and Michael Phan. Stella is an econometrician diagnosed with autism; specifically, Asperger’s Syndrome. Because of this, she struggles with getting along with people, not to mention dating and sex. So she hires Michael—a biracial (Vietnamese and Swedish) escort—to be better at sex. I’ve heard a lot of mixed reviews about this novel, but I was still so excited to give it a try and I am so happy to say that it didn’t disappoint. It has such really cute vibe!

I love how this is an own voices story, given that Helen Hoang was also diagnosed with Asperger’s in 2016 which makes it even better knowing that Stella’s social anxieties isn’t just based on research but from her own personal experiences, feelings, and emotions. Stella’s character is one that I will always remember as her anxieties are somewhat relatable at times as I’m also not that comfortable with parties and events with a huge number of people that I am not close with.

Michael, on the other hand, is such a lovable character. For starters, his being biracial is amazing as it gives us a glimpse of Vietnamese culture. Vietnam has always been one of the Asian countries that I would love to visit once travel bans are lifted, but reading Helen Hoang’s novels just got me even more hyped. Their love scenes were also very interesting and I appreciate Michael’s character even more because he always asks for permission and if Stella’s not comfortable with it, he doesn’t do it. Aside from being a part-time escort, Michael is also a fashion designer which adds up to all the badassery and cuteness that is Michael Phan.

Stella and Michael are so adorable together. I love every bit of their relationship and how they have gotten around to figuring out how they truly feel about each other. The only reason why I didn’t give it 5 stars is because of the love triangle that happened towards the ending. It felt like it was just thrown in there for a little drama, but in my opinion, the story would’ve been just as amazing without it.

Overall, I definitely appreciate and loved the autism and Asian rep. Reading this book was such a delight and it made me feel all warm and fuzzy inside. I recommend this to everyone who’s up for some light, fun, and fluffy read.