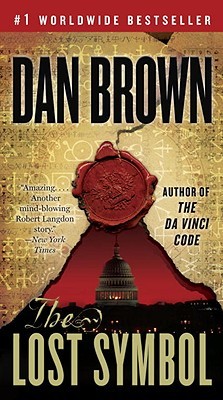 In this stunning follow-up to the global phenomenon “The Da Vinci Code,” Dan Brown demonstrates once again why he is the world’s most popular thriller writer. The Lost Symbol is a masterstroke of storytelling–a deadly race through a real-world labyrinth of codes, secrets, and unseen truths . . . all under the watchful eye of Brown’s most terrifying villain to date. Set within the hidden chambers, tunnels, and temples of Washington, D.C., The Lost Symbol accelerates through a startling landscape toward an unthinkable finale.

As the story opens, Harvard symbologist Robert Langdon is summoned unexpectedly to deliver an evening lecture in the U.S. Capitol Building. Within minutes of his arrival, however, the night takes a bizarre turn. A disturbing object–artfully encoded with five symbols–is discovered in the Capitol Building. Langdon recognizes the object as an ancient invitation . . . one meant to usher its recipient into a long-lost world of esoteric wisdom.

When Langdon’s beloved mentor, Peter Solomon–a prominent Mason and philanthropist–is brutally kidnapped, Langdon realizes his only hope of saving Peter is to accept this mystical invitation and follow wherever it leads him. Langdon is instantly plunged into a clandestine world of Masonic secrets, hidden history, and never-before-seen locations–all of which seem to be dragging him toward a single, inconceivable truth.

In Dan Brown’s third installment to the Robert Langdon series, we deal with issues that concern Freemasonry, Noetic Sciences, and ancient mysticism.

Here we follow Robert Langdon as he heads to Washington, D.C. to meet with an old friend and speak for an event that this particular friend organized. Of course, as he lands in D.C., everything went haywire.

As most of Dan Brown’s novels, this chunk of a book is honestly impossible to put down as it has the power to immerse you deeply in the story. I always find myself at the edge of my seat wanting to know what happens next. Though it took me way longer to finish this book compared to Angels & Demons and The Da Vinci Code, I was still as engrossed with the story.

What I like most about Dan Brown’s works is that I’m not only entertained, but I also learn a few things. Some of the things he mentions in his books are real, if you just do your research. So I totally understand the mixed reviews given that Dan Brown creates a fusion of facts and fiction in his works.

To be honest, this is my least favorite of all of his books. I’m not sure if it’s just me, but some parts of this were a bit dragging compared to his previous novels which makes this the first Dan Brown book that I rated lower than 4 stars. Nevertheless, I really enjoyed reading this.