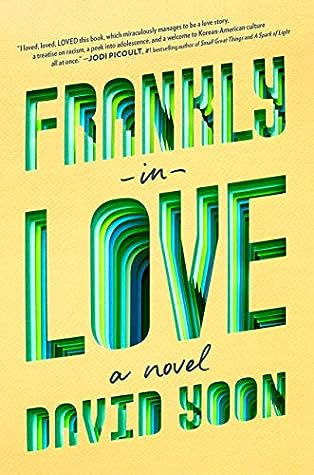 Frank Li has two names. There’s Frank Li, his American name. Then there’s Sung-Min Li, his Korean name. No one uses his Korean name, not even his parents. Frank barely speaks any Korean. He was born and raised in Southern California.

Even so, his parents still expect him to end up with a nice Korean girl–which is a problem, since Frank is finally dating the girl of his dreams: Brit Means. Brit, who is funny and nerdy just like him. Brit, who makes him laugh like no one else. Brit . . . who is white.

As Frank falls in love for the very first time, he’s forced to confront the fact that while his parents sacrificed everything to raise him in the land of opportunity, their traditional expectations don’t leave a lot of room for him to be a regular American teen. Desperate to be with Brit without his parents finding out, Frank turns to family friend Joy Song, who is in a similar bind. Together, they come up with a plan to help each other and keep their parents off their backs. Frank thinks he’s found the solution to all his problems, but when life throws him a curveball, he’s left wondering whether he ever really knew anything about love—or himself—at all.

Frankly in Love follows the story of Frank Li, a Korean-American who lives in California all his life, whose parents are racists. They only want Frank to date a Korean girl which is a huge problem for him because he’s already dating a white girl from his class. He’s so scared of his parents finding out because of how it went with his sister who dates a black guy. So Frank turns to his Korean friend, Joy Song, who is almost in the exact same dilemma as he is. Together, they come up with the ultimate plan: They started fake-dating to go out with their respective partners. It was the perfect idea, until things started going in a different direction.

Despite having read a lot of mixed reviews about this book, I picked it up and decided to find out for myself and I am so glad that I did because I really enjoyed it. Frank’s character was totally relatable not only to Korean-Americans but to every teenager with strict parents. I personally related to his struggles of wanting to just live the life he wants without having to think about how his parents would react to his decisions. I admit that there were parts or scenes in the book where Frank annoyed me, but I think that it’s part of what made his character more human. I’m not saying that his decisions and wrong-doings are right or normal, but these things actually happen in real life and we all make mistakes. It’s how we redeem ourselves in the end that matters the most.

I absolutely loved Q’s character and I would love to read more of his story and POV if David Yoon permits. Haha I would also love to read more of Hanna’s story and how she managed to get through her own issues and problems. Also, to everyone who has read this, is it just me or did it seem like the Yoon family did a cameo in the book? I find that really cute!

This was supposed to be a love story, but it turned out to be more than that. It’s a coming-of-age story about identity, race, family-traditions, and more. I recommend this to everyone who enjoys reading coming-of-age stories and contemporary romance because it’s absolutely worth your time.

1 thought on “Book Review: Frankly in Love by David Yoon”