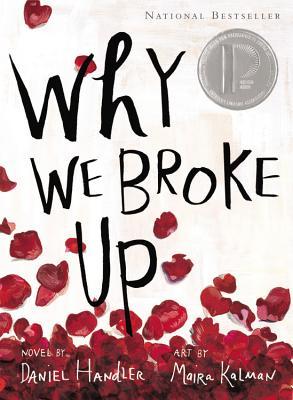 Title: Why We Broke Up

I’m telling you why we broke up, Ed. I’m writing it in this letter, the whole truth of why it happened.

Min Green and Ed Slaterton are breaking up, so Min is writing Ed a letter and giving him a box. Inside the box is why they broke up. Two bottle caps, a movie ticket, a folded note, a box of matches, a protractor, books, a toy truck, a pair of ugly earrings, a comb from a motel room, and every other item collected over the course of a giddy, intimate, heartbreaking relationship. Item after item is illustrated and accounted for, and then the box, like a girlfriend, will be dumped.

Why We Broke Up has been on my to-read list for a very long time, and I’m glad that I finally had the chance to read it. It was a light and fast read because there are a lot of art and some chapters consist of only a page or two.

Min Green and Ed Slaterton are breaking up. So as soon as Min is ready to finally move on, she decides to drop all of Ed’s things (which Min stored in a box with the quote: “You either have the feeling, or you don’t) in his front door. During the ride to his place, Min decided to complete the letter she started writing for Ed where she told the story of how they started dating by describing all the items inside the box. For me, it is really a creative way of telling a story and the art was beautiful.

Given the title, of course, we already know how Min and Ed’s story will end, and though I saw it coming, it still hurt. The story was kind of predictable, in a sense, especially when Annette entered the picture, but it still hurt as hell. Putting myself in Min’s shoes, I just couldn’t imagine how Ed could’ve done such a thing.

I was supposed to give it a solid 3 stars, but decided on giving it an extra .5 for the feeling that the book gave in the end. Also, of course, for the beautiful art. I think that I would have liked this book more if I read it a couple of years ago, but it was still a nice read overall.

1 thought on “Book Review: Why We Broke Up by Daniel Handler”