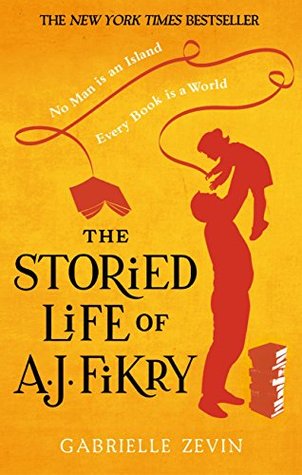 As surprising as it is moving, The Storied Life of A. J. Fikry is an unforgettable tale of transformation and second chances, an irresistible affirmation of why we read, and why we love.

We are not quite novels.

We are not quite short stories.

In the end, we are collected works.

A. J. Fikry’s life is not at all what he expected it to be. His wife has died; his bookstore is experiencing the worst sales in its history; and now his prized possession, a rare collection of Poe poems, has been stolen. Slowly but surely, he is isolating himself from all the people of Alice Island—from Chief Lambiase, the well-intentioned police officer who’s always felt kindly toward him; from Ismay, his sister-in-law, who is hell-bent on saving A.J. from his dreary self; from Amelia, the lovely and idealistic (if eccentric) Knightley Press sales rep who persists in taking the ferry to Alice Island, refusing to be deterred by A.J.’s bad attitude. Even the books in his store have stopped holding pleasure for him. These days, he can only see them as a sign of a world that is changing too rapidly.

And then a mysterious package appears at the bookstore. It’s a small package, though large in weight—an unexpected arrival that gives A.J. the opportunity to make his life over, the ability to see everything anew. It doesn’t take long for the locals to notice the change overcoming A.J., for the determined sales rep Amelia to see her curmudgeonly client in a new light, for the wisdom of all those books to become again the lifeblood of A.J.’s world. Or for everything to twist again into a version of his life that he didn’t see coming.

The Storied Life of A.J. Fikry is an affirmation of reading and the love of books and how books can make our lives a little better despite how crazy and cruel the world may seem. This is the perfect book for book lovers and booksellers and, basically, for everyone who loves to read. I flew through this book because I couldn’t stop reading. There were sappy parts but it was kind of appropriate. This book will sweep you up in a really good way.

A.J. Fikry is a grumpy man who is an avid bookworm and who also happens to own the only bookstore in Alice Island. Ever since his wife died from a car accident, he has made his life more miserable by drinking and getting drunk. Because of his drunkenness, he loses a book that is worth enough money for him to retire and he is more miserable than ever. Fate somewhat intervenes when one day, he found very special package in the confines of his bookstore which changes his life forever.

Gabrielle Zevin’s writing style is very easy to read which makes this book such an amazing treat for her readers. I personally became attached to each of the characters in this book as they are all very easy to love, even A.J. One of my favorite characters in the book is the cop, Lambiase. A.J. has introduced him to reading and books and through the years, he turned out loving to read crime and young-adult novels! He even hosts the monthly Chief’s Choice Book Club.

Also, one of the things that made me love this book is that it has a lot of book recommendations. I’ve listed them all down:

I think I managed to list all of them, or not? Anyway, as you can see, there were a lot of book titles mentioned in this book and I love books about books! I personally included some of the books on the list on my to-read list on Goodreads.

This book is both happy and sad, funny and serious, but nonetheless, I loved it and I wouldn’t have it any other way.

1 thought on “Book Review: The Storied Life of A.J. Fikry by Gabrielle Zevin”