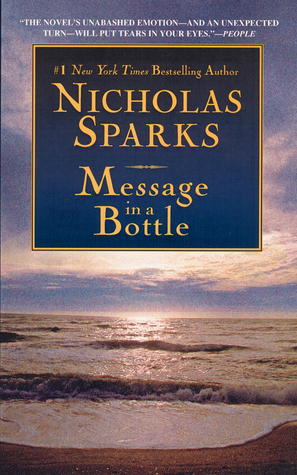 I haven’t seen the movie yet, but I know what I’m getting myself into when I started reading this book. In fact, I’ve been resisting reading it for a long time since I bought it for I keep asking myself if I’m ready to jump in another tearkjerking ride that Nicholas Sparks’ novels are known for.

Trying to take a break from the city and her always busy life, Theresa Osborne takes a much-needed vacation at Cape Cod when she stumbles upon a corked bottle with a scrolled-up letter inside.

When she arrived back to Boston, she agrees with her friend, Dianne, to publish the letter in her column. Soon after, her cloumn turns up two more letters written by the same person, Garrett Blake.

Intrigued, Theresa finds herself travelling to North Carolina, where she finally meets the mysterious Garrett Blake and discovers that her suspicion about Catherine is true. After spending most of her stay in North Carolina with Garrett, they develop a unique relationship that they tried to keep even after Theresa went back to Boston.

Throughout the story, we watch the couple fall in love even more with each other,  and how they learned to compromise for something they really want to work out. Somehow, whether we admit it or not, we all have a Garrett inside of us. By relating to Garrett’s experiences and struggles, we are drawn and connected to the couple’s story.

All in all, I find this book a compassionate story of a person looking for love and a person who never thought he’d ever be capable of loving someone again. Garrett and Theresa’s story is heartbreakingly beautiful with all of the lessons its readers will learn; both Garrett and Theresa gives each of us hope that everything will work out.

For this review, instead of putting a quote at this part of my review, I’m putting an excerpt from Nicholas Sparks’ interview with the New York Times about this novel:

“Message in a Bottle was inspired by my father after the death of my mother. In 1989, six weeks after I was married, my mother and father went horseback riding. They were avid riders and very comfortable on horses, and were simply walking the horses along a scenic trail. For a reason that no one can explain—we assume it was the horse, a rather skittish Arabian—my mom fell out of the saddle, off the horse, hit her head on a rock, had a cerebral hemorrhage and died.

My mother and father had married at the age of twenty-one and my father was absolutely crushed by her death. They’d been married twenty-seven years and my father didn’t have the slightest idea of what it meant to be a grown-up without my mom. A lot of people wear black to a funeral. My father wore black every day for four years. He pretty much became a recluse. He pulled away from his family and friends, he stopped going out, he stopped doing pretty much everything. All he did was go to work and back home again. It was heart-breaking to watch.

After four long years of worrying about him, my father finally started taking baby steps out in the world again. He started reconnecting with family and friends, eventually he started to date again—think more years passing—eventually he met someone in particular, eventually he fell in love again. And then one day, about seven years after my mom had died, I got a call from my father. “I’m engaged,” he said.

Two days after that phone call, my father was driving home late one night, fell asleep at the wheel of his car, crashed, and died.“

I’m leaving you with that. It’s heart-breaking, and I have no words for it.